The previous article explored the ADP movement over a Rookie WR’s first year in the hopes of finding that historically cheap pedigree buys produced a positive return on investment more often than not. Unfortunately, this was not the case.

So what DOES influence movement in ADP? Are you ready for an anticlimax?

Production, production, and production. Yes, groundbreaking stuff, but points per game production in the rookie year can explain a large amount of movement in ADP. This means that even in a “rebuilding” mode team needs to be considering production, insofar as it affects the value of their assets. In fact, points per game ALONE can explain 65% of the variance in ADP following the first year. In the world of data science that is a staggering amount of explanation from a simple regression with one variable. The chart below illustrates this, and with the strong correlation between ADP and trade value, it can be inferred that this production will greatly determine the type of return you may receive on their rookie investment. 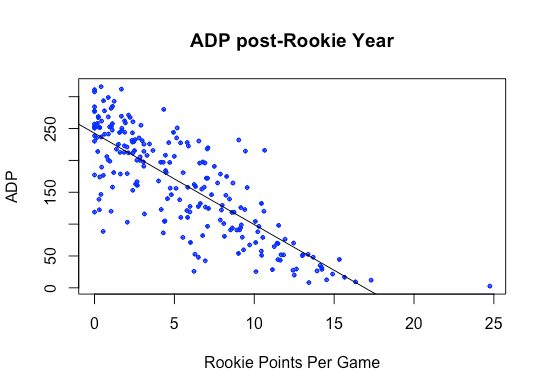 So, the advice is to “buy rookies that will perform”?

Short answer, yes. But there is more to be gained here. Let us examine the effect of production when controlling for rookie ADP and Draft Pedigree. When we combine all of these factors into a model, we can calculate the amount of production required for a rookie to expect to maintain current ADP. To be clear, hitting that mark exactly does not guarantee the players ADP will not move, it just means they are equally likely to drop or rise, and what actually happens will depend on the other factors that affect perceived value (Note that not all ADP variance is explained by the model, column 5 of the table below).

The following table shows the calculated average PPG expectation (column 4) for WRs in terms of their respective draft pedigree. Column 3 contains the ADP/PPG slope values. These tell you how many ADP positions these players typically rise or fall for each PPG exceeding or falling short of the expectation.

What about individual player expectations?

Below is a table showing the market’s PPG expectations based on the ADP and pedigree of each 2020 rookie.

What does all this mean?

To help with interpretation, we can see that CeeDee Lamb, as a 1st round draft pick with an ADP of 35, carries a market expectation of 11.17 points per game. This means if he hits this mark exactly, we can expect his ADP to stay where it is, ALL ELSE HELD CONSTANT. This doesn’t incorporate exogenous variables such as QB change, injuries/trades concerning himself or teammates, or even just offseason press hype. We can also expect his ADP will rise/fall by 6.63 positions for every PPG he exceeds or falls short of this expectation.

But how likely is it that he reaches his expectation? Well, the last column shows the percentage of 1st round rookies that reached that mark, in this case we may say that if Lamb reaches expectations that would put him in the top 38% of rookie seasons for first rounders historically. So, if you “CeeDee catch radius on Lamb” (you like that one?) and believe his talent and situation is conducive to reaching such a benchmark, then he is appropriately priced. Furthermore, with the 6.63 ADP/PPG slope, we can say that even with the median season for a 1st rounder (10.08 PPG), his ADP will only fall approximately half a round.

Bryan Edwards has a low PPG expectation. Does this mean good value?

Yes and no. Edwards stood out as a “buy” in the building of this table and this seems to be a popular sentiment within the industry. I saw that his PPG expectation was lower than some of the rookies being taken behind him and his upside seemed large with every PPG above expectation correlating to an expected ADP improvement of 11.53 spots. While this is true, only 27% of 3rd round rookies met even this seemingly low expectation of 6.51 points. There is an argument to be made that Edwards is in a unique position to be immediately impactful as a 3rd rounder but that is certainly priced in.

Another stand out for this study was the risk associated with the highly touted 2nd rounders. Higgins, Pittman and Mims would all need seasons that put them in the top 19% of 2nd rounders historically in order to reach their market expectations. Even Shenault would require a top 23% historical season. Now is a good time for a brief disclaimer; many fantasy players aren’t buying the aforementioned players for their rookie year production. I hear many cite the eventual departure of AJ Green, TY Hilton and Adam Gase (please Lord, free the Jets) as potential tipping points in the ascension of these rookies, and therefore we may expect strong 2nd or 3rd year breakouts. While those narratives make sense, I think the thing to take away from this is that it is highly likely that some or all of the 2nd round rookies will be more or as attainable next year and carry tremendous downside if they don’t see the field in year one; If Higgins has an average season for his draft pedigree(6.84PPG) his ADP is expected to plummet almost 4 full rounds! With a rookie QB and two incumbent WRs ahead of him on the depth chart (3 depending on which version of John Ross shows up this year), perhaps expecting such an exceptional rookie season is a bit bold. We can stroll down narrative street and talk about AJ Green potentially leaving or the rookie connection that may be formed with Burrow, but the fact is you’re making a bet and you aren’t getting fair odds. That is the result of the high price; the average ADP for 2nd rounders is 125 so drafting these guys in the 60s, 70s and 80s is quite rich. In contrast, at a 143 ADP, KJ Hamler only needs a measly 5.24 PPG to meet expectation with a 10.81 ADP improvement for every PPG that he exceeds that expectation.

These are just some of the insights that can be gleaned from this information, there is plenty of data in the table that may surprise you and change your sentiment. The thing to take away is that there are risks and expectations baked into these players’ costs. By all means make your bets, but make sure you know the odds. I hope this article serves less as an action plan but more of a framework in which you can make decisions based on your own speculative expectations. Finally, the importance of production cannot be understated. Even if you are not contending, production will impact the value of your assets.