This article is written by Carlo Surace.  You can find him on Twitter @carlo_surace

At this time every year rookie hype is at its peak. Proven veterans seem to be kicked to the curb in pursuit of the new hotness. The question is, are these rookies “overpriced”? It is important to note that price/value, mean different things to different people. This article will refer to “market value” and will use ADP as a proxy for this. ADP is significantly correlated to what a player is perceived to be worth in a trade. Thus, no matter how you acquire these rookies, this article will examine the typical “capital gains” one may expect on their investment.

Some may rebut this analysis claiming, ‘market value is useless if the players never produce and help you win’. This is true, but often rookies are acquired in a rebuilding stage to insulate or grow total asset value and not for the purpose of immediately contributing. This is especially the case with WRs, which will be the focus of this analysis. To this end, it is important not to overpay for a rookie WR with a high chance of value decay which will limit the moves you can make later. Perhaps, rookies are a better “buy” following the rookie year once the shine has worn off.

Below is a table displaying startup (Non-Superflex) ADP by NFL Draft Pedigree for players in their rookie year vs their second year. Nothing too noteworthy here; as expected draft pedigree is correlated to ADP. There is no discernible difference year over year barring round 5, however this is statistically insignificant. Therefore, there is no clear bet that one can make in terms of pedigree to insulate value. As for the percentage that maintained/improved their ADP, the number hovers around a 50/50 bet regardless of pedigree. The exception is round 4 exhibiting a 62% improvement, however this number is slightly overstated as WRs that fall outside the top 250 after year one were removed from the sample.

What if we just buy players that are cheap in terms of ADP relative to draft pedigree?

If this strategy were effective, we would expect that players with later ADPs yield an ADP improvement over their first year more often than players with an earlier ADP, at the same draft pedigree. This is somewhat intuitive, as expectations are lower for the players drafted later and thus have more room to exceed expectation and improve their perceived value. In this analysis, “Cheapness” will be measured by taking a player’s ADP and comparing it to the historical average ADP for players with the same pedigree.

If the hypothesis is true, one would expect that cheap players improve at a higher rate more often than expensive players. Below is a bar chart, each bar represents 10% of rookies in our sample. The furthest left Bar contains the 10% most “overvalued” rookies relative to pedigree. The second bar contains the 2nd most “overvalued” 10% and so on and so forth. The Y axis represents the percentage of rookies in each decile that exhibited an ADP improvement over that first year. We would expect a high rate of improvement to the right and a low rate of improvement to the left. We can clearly see there is no relation. 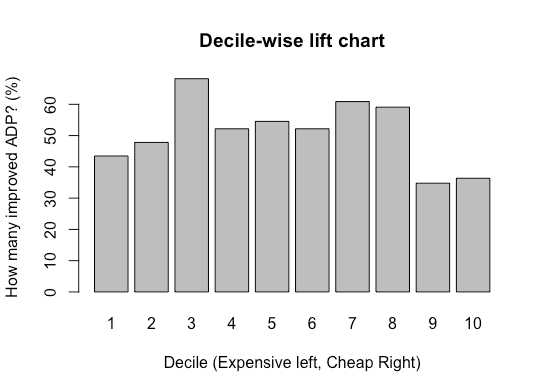 What does that mean?

Surprisingly, the conclusion is that the market is efficient to a certain extent. This means that the expectations that are built into a players ADP are correct ON AVERAGE. We can see this in the chart below, the player’s rookie ADP is a reflection of what the fantasy world expects from them and there is a correlation to actual points per game production. 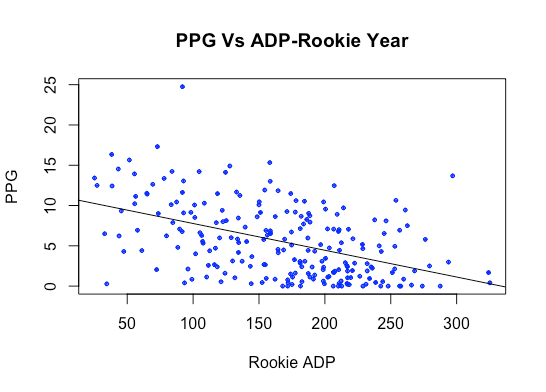 Obviously, we can see that there is a giant variation across the line of best fit, which means ADP only explains so much, but in general early ADP players score more than later ADP players.

Conclusions – Where do we go from here?

Unfortunately, there is no naïve way of speculating on a rookie purely based off draft pedigree and ADP alone. Ideally, I was hoping to find that historically cheap first round WRs produce an “ADP return on investment”, or something of that nature, but that is not the case. There must be some wisdom in the masses; when the market puts a discount or premium on a player there is something to that. This is of course generally speaking, there is an equal chance of under performing or over performing across the early and late ADPs. We need to incorporate additional variables in order to make informed speculation. More to come on this.